It's Never Too Late To Repent! (Jonah 2) 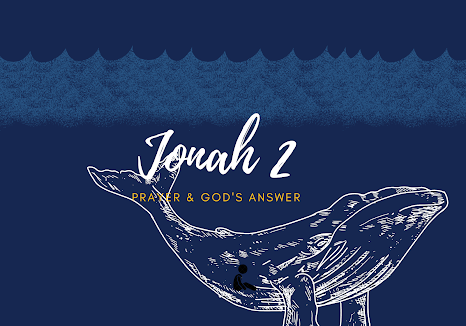 In my distress I called to the Lord, and he answered me. From deep in the realm of the dead I called for help, and you listened to my cry.”

We all know the Sunday school story about Jonah who refused to obey God’s command to him to preach to the people in Nineveh. The people of Nineveh were wicked and Jonah was probably too scared or too scornful of the people there, and he ran away instead. He got on a boat to go somewhere else to ‘escape’, but the boat got into a big storm. The sailors on the boat realised that they needed to pray in order to be saved from the storm. Jonah did not realise this himself, he had been sleeping soundly when the sailors woke him up! Eventually, Jonah told the sailors that he had been running away from God. He told them to throw him into the sea to save them all from drowning, so the reluctant but terrified sailors cried out to God and threw Jonah overboard as suggested. It is interesting that after Jonah ran away from God’s command, he encountered a group of God-fearing fishermen and got them into a big and dangerous storm. They were the ones who prayed at first and who had to help deliver him. Perhaps when you are disobedient to God, He sends faithful people to help you but the whole process of helping a disobedient person can be very difficult and turbulent. Anyhow, Jonah ended up in the sea and God sent a big fish to swallow him up.

Jonah could have drowned to his death in the sea if God had not sent the big fish along to swallow him. Nevertheless, in general when you are swallowed up by another creature you do not survive for very long. You will likely be squeezed by the intestines of whatever has swallowed you, suffocate and die. So the fact that Jonah survived for 3 days indicates that this was a miracle and part of God’s plan to save him. At some point during those 3 days, Jonah’s heart turned from cold avoidance to urgent seeking. Finding yourself in severe trouble can often do that to you! In Chapter 2, Jonah cried out to God with everything that he had. He realised that he was as good as dead (v2) because God had hurled him into the seas (v3). However, he was filled with hope because he knew that God had saved him. Even though he was in the depths of the sea, he had not drowned. He realised that God had a plan and probably realised that he should start praying very hard! He repented and vowed to preach that Salvation comes from the Lord (v9) as God had instructed him to do to the Ninevites. As soon as he vowed this, God commanded the fish and Jonah was vomited onto dry land. God wanted to know what Jonah’s heart was before he ‘released’ him. God was looking for obedience from Jonah. I suspect that if Jonah had not vowed to be obedient to God, or if he had just complained or felt sorry for himself, he would have stayed inside the fish for much longer. In the rest of the book Jonah goes to Nineveh and preaches to the people about God, and they repent. Jesus himself used Jonah’s story, when he told the Israelites that “as Jonah was a sign to the Ninevites, so also will the Son of Man be to this generation” (Luke 11:30). Jonah’s story appears to foreshadow Christ’s death and resurrection., and our salvation through Him.

This chapter tells a powerful story of how it is never too late to repent while you are still alive. You might be in a situation that seems terrible or as if your very life has been lost. You may feel lost, condemned, ridiculed, or in great danger. You may wonder where God is hiding, in your time of trouble. However, the solution is to pray and seek God and to trust that He hears our prayers. It helps to search our hearts and actions to see if there is anything we need to do in obedience to God. Have we been running away from something He has commanded us to do? Is there anything we have been trying to avoid? Or perhaps there is something new He wants us to start praying for. God can bring a breakthrough into our lives because He is the God of deliverance! He is able to turn around even the most difficult situation for good and turn our lives into the most powerful testimony of salvation.

Almighty God. I thank You that You are the God of salvation and that You hear all my prayers. Forgive me if I have been disobedient or if I have avoided doing the right thing. Help me to repent and to turn my heart completely to You. In Jesus’ name,  Amen.