1 The word of the Lord came to Jonah son of Amittai: 2 “Go to the great city of Nineveh and preach against it, because its wickedness has come up before me.” 3 But Jonah ran away from the Lord and headed for Tarshish. He went down to Joppa, where he found a ship bound for that port. After paying the fare, he went aboard and sailed for Tarshish to flee from the Lord.

4 Then the Lord sent a great wind on the sea, and such a violent storm arose that the ship threatened to break up. 5 All the sailors were afraid and each cried out to his own god. And they threw the cargo into the sea to lighten the ship. But Jonah had gone below deck, where he lay down and fell into a deep sleep. 6 The captain went to him and said, “How can you sleep? Get up and call on your god! Maybe he will take notice of us so that we will not perish.”

9 He answered, “I am a Hebrew and I worship the Lord, the God of heaven, who made the sea and the dry land.”

10 This terrified them and they asked, “What have you done?” (They knew he was running away from the Lord, because he had already told them so.)

11 The sea was getting rougher and rougher. So they asked him, “What should we do to you to make the sea calm down for us?”

12 “Pick me up and throw me into the sea,” he replied, “and it will become calm. I know that it is my fault that this great storm has come upon you.”

13 Instead, the men did their best to row back to land. But they could not, for the sea grew even wilder than before. 14 Then they cried out to the Lord, “Please, Lord, do not let us die for taking this man’s life. Do not hold us accountable for killing an innocent man, for you, Lord, have done as you pleased.” 15 Then they took Jonah and threw him overboard, and the raging sea grew calm. 16 At this the men greatly feared the Lord, and they offered a sacrifice to the Lord and made vows to him.

17 Now the Lord provided a huge fish to swallow Jonah, and Jonah was in the belly of the fish three days and three nights. 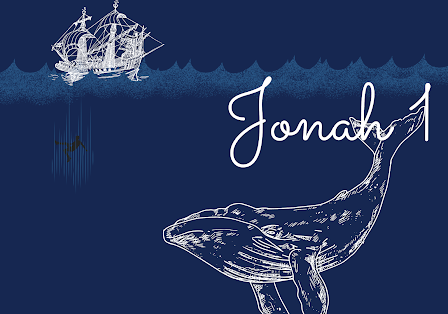 What does God do when the people He sends to preach His Word don’t obey?
Jonah likely would have felt going to Nineveh would be a risk to his personal safety, as in that region, then as now they were Israel’s enemies. Certainly, it would be an uncomfortable trip! He also likely would hate those people as enemies of Israel. He may have reasoned that if God executed His judgment against Nineveh this would be doing Israel a big favour.
Nevertheless, God wanted to save the people of Nineveh. He wanted the Ninevites to repent of their sins. It is a frequent and significant theme of Scripture when God commands His people to go and make disciples of all nations. Jesus commanded His church in what we now call “The Great Commission” found in Matthew 28:19 - 20, Mark 16:15 - 16, Luke 24:47 - 48, and Acts 1:8.
Ezekiel was warned that he was accountable for the blood of Israel if he failed to warn them of God’s judgment against them. God called him a “watchman” who is supposed to “blow the trumpet” to warn the people (a metaphor for preaching repentance back to God). God told Ezekiel he would be accountable for their deaths if he failed to warn Israel.
In Proverbs 24, verses 11 - 12 Solomon warns us:
Rescue those being led away to death; hold back those staggering towards slaughter. If you say, “But we knew nothing about this,” does not he who weighs the heart perceive it? Does not he who guards your life know it? Will he not repay each person according to what he has done?
We have a responsibility to be witnesses of the revelation of Jesus Christ to those around us so others have the opportunity to get saved and God is glorified in others lives. Are we obedient to this call? In our passage today we see that Jonah heard God’s command about this and decided to run in the opposite direction! He thought he could run away from God but he could not. He thought if he fled to Tarshish (possibly in Spain) he could avoid being sent to Nineveh. God was making his judgment so clear that even the pagan sailors with Jonah on the boat rebuked him for his disobedience! See Jonah 1, verses 10 and 11. Notice that God never said, “oh well” and found someone else to do it. He insists Jonah fulfils his mission. He disciplines Jonah until he repents.
Plan: What is the Holy Spirit speaking to you using this Scripture today? Take a few moments to think and pray. Answer honestly. Just between you and God. Write your answers down. Do you need to change something to be obedient? If so, what? Be specific and practical.