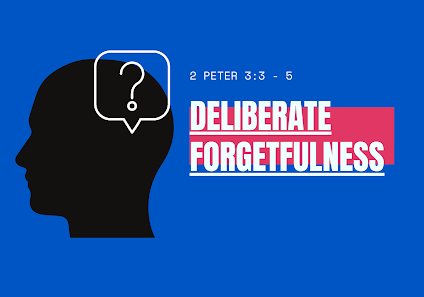 Above all, you must understand that in the last days scoffers will come, scoffing and following their own evil desires. They will say, “Where is this ‘coming’ he promised? Ever since our ancestors died, everything goes on as it has since the beginning of creation.” But they deliberately forget that long ago by God’s word the heavens came into being and the earth was formed out of water and by water.

Have you ever forgotten something important like a birthday or anniversary? Perhaps an appointment? Or have you ever deliberately forgotten to invite someone to an event due to personal conflict or relational strain? Maybe you just happen to struggle with retaining information. This happens too.

In 2 Peter 3:1, the author told his reader that he wrote this letter as a reminder and as a stimulus that will incite in them the memory of God, Jesus and the Gospel. Why though? Because people forget! And this pattern of willful forgetfulness is found throughout the history of Israel. As soon as God delivered them, they willfully forgot Him and pursued the gods of the world.

In verse 5, Peter called it "deliberate forgetfulness". A type of selective spiritual amnesia. People seem to forget that there is a God who made all these and will restore them, for His glory and for those whom He loved.

Now, to deliberately forget means that we have to consciously make a decision to forget. Imagine deliberately forgetting God and Jesus who was sent to save us? It must take quite an effort to do. But it is not uncommon. We do this a lot.

Due to this deliberate forgetting, there is a growing disbelief in the Word and Promises of God in this present age, which Peter termed as "the last days". More and more people are drawn away from the Gospel and question the validity of Scripture as more "scoffers" show up in these last days. Because of their unbelief in God and His goodness, they live their lives as if there is no eternal consequence, tempting others and believers to do the same.

We see this in recent news of men and women who once believed in Jesus who would later renounce their faith in him. They have forgotten. They have become "scoffers". Such deliberate forgetfulness puts us in danger. It sets us up against God and to be rejected by Him. Jesus said that whoever denies Him before men, He will deny him before the Father in heaven (Matthew 10:33).

In C.S.Lewis' Narnia series it is told of a story of Susan Pevensie who did not return back to Narnia for "being too old". In the last battle, she was said to be "no longer a friend of Narnia." She grew up and drew away from Narnia, forgetting everything she had known of it. Narnia was an allegory of God's Kingdom. Each of us are in danger of doing the same.

Hence it is important to remind one another regularly of Him and the salvation we have by faith in Jesus Christ. In fact, as believers it is our duty to remind one another regularly. We are to be mindful that there will be many who will scoff and blaspheme against God; whose purpose is to lure us away from God. We, however, must be careful to not fall into their pattern of thought.

But, allow me to end with a positive tone. God is patient with us. Even when we forget, He does not forget His promises. Instead, He waits patiently for all to repent and return to Him (verse 9). This is our comfort. God is gracious.

Take some time to consider the reading and prayerful seek the Holy Spirit to help you overcome the temptations to forget God in Jesus Christ.

If you know a friend or family member who is "deliberately forgetting" God, take a moment to pray on their behalf for God to extend His grace toward them for their sake.

Have a blessed day.