GOD IS WORKING BEHIND THE SCENES

If  you were with David that night on the west side of the river Jordan, knowing well that David’s son has proclaimed himself king and is coming down upon David in thousands, and it all may be over by the morning —won’t you wonder how is God going to work out His plan? Watch God at work here.

Absalom somehow wanted to kill his father King David, for the love of wanting to be the next King. So, he seeks for advice of Ahithophel and of Hushai.

Ahithophel suggests to Absalom, to move quickly and come by a surprise attack with overwhelming force and with a focused objective. He advices to gather twelve thousand men at night and pursue David, when David is weak and weary. Ahithophel assures Absalom that he will kill King David. That was good advice to Absalom.

However, to be sure, he asked the advice of his next counsellor, Hushai. But Hushai disagrees with Ahithophel’s advice.  Swanking about King David’s strength in war, he says “It’s better by far to wait awhile and gather a vast army from Dan in the north to Beersheba in the south.” Hushai is appealing to Absalom’s vanity, that he would lead this largest army that Israel has ever seen. Absalom and his men were completely impressed with this guidance, in fact thought it was a better advice.

It wasn’t actually better. Militarily it was a poor strategy. If that time was given, David will get organized, people will go over from Absalom to David. It’s a tough tactic, but for some reason Absalom buys it because he buys into the vanity of it.

And now we learn the secret of Hushai’s success. It was because God had ordained to defeat the counsel of Ahithophel. And why? To the intent that God might bring evil on Absalom (17:14). Thus, behind the scene God was seen to be at work confirming Absalom’s defeat. When David came out of the situation successfully, all would know that it was God who had accomplished it. Don’t forget David’s prayer; O Lord, I pray, turn the counsel of Ahithophel into foolishness! (2 Samuel 15:31)

REST BY KNOWING GOD IS WORKING

Have you ever found yourself facing a situation at some point in your life, where having been praying to God about it for a while, there was still no visible change seen?

Just because you don’t see any instant change, it does not mean that nothing is happening, nor does it change the fact that God is at work behind the scenes arranging things in your favor. Romans 8:28. In all things, God works for the good of those who love him, who have been called according to his purpose, this includes you. God will prepare a Hushai to talk in favour of you, because He has thoughts to prosper you.

Let me remind you, how God was working behind the scenes, in the life of Joseph. To bring three men together in the same place–so that Joseph could interpret their dreams. Be certain, that God is working in the lives of a person or people perhaps you have never met, in a place you have never been, in order to accomplish His purpose for you and for them. Philippians 2:13, for it is God who works in you to will and to act in order to fulfill his good purpose. No suffering is wasted, and God is always at work for our good and His glory. When we cannot comprehend why trials come and struggle to imagine that anything good can come from them, we can rest in the security that GOD is in CONTROL because HE IS SOVEREIGN.

Prayer: Father, sometimes I struggle to trust you when you are silent. Increase my faith and help me believe I am always in Your thoughts Father. You have plans to prosper me and, give me an expected end. In Jesus name Amen. 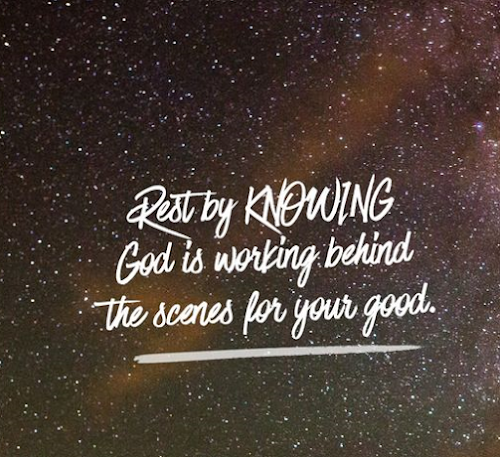