Half Obedience is disobedience

It has been a thought-provoking reading journey as we have sketched Saul’s rise to leadership. Today we read of his eventual falling away from the Lord.

The final rejection of Saul from being king, for his disobedience to God’s command in not utterly destroying the Amalekites, is here. His integrity is laid to dust because of his mismanagement, disobedience and false hope to augment his own name and honor.

Suffice it to say, God is always just in his actions; this was a unique personality in Old Testament history; that God chose to bring his just judgment for sin upon the Amalekites at this time; and he was using the nation of Israel to do it, through Saul. He thought a little disobedience is acceptable and ignored God’s command “attack the Amalekites and totally destroy everything that belongs to them” (Vs 3) Saul did his work by halves, (Vs 9). He spared Agag, because he was a king like himself, and perhaps in hope to get a great ransom for him. He spared the best of the cattle, and destroyed only the refuse, that was good for little.

Do we sometimes fall into the same trap as Saul, thinking that somehow partial obedience is just as good as complete obedience? To spare the best of Amalek is surely equivalent to sparing some plausible indulgence, some favorite sin of ours; and to spare Agag is to be merciful to ourselves, and linger in those sinful pleasures/ habits that we don’t wish to give up. God’s commands are not always easy to obey, but God’s commands are to be fully obeyed.

Because Saul was disobedient, God tells Samuel “I regret that I have made Saul king (Vs 11)”, Whenever we choose to sin, we are choosing our way over God’s and it hurts Him. Ephesians 4:30 says: “And do not grieve the Holy Spirit of God...” If we remembered how much it grieves God when we sin, perhaps we would be motivated to greater obedience to Him.

Verses 10-23 here, Saul is called to account by Samuel concerning the execution of his commission against the Amalekites. The deceitfulness of Saul’s heart, is made obvious. First, he builds a monument for himself, probably to brag about his accomplishment, forgetting who chose him to be a King. He then plays a blame game and even justifies, his action, saying “But I did obey the Lord, … the soldiers took the sheep and cattle from the plunder, the best of what was devoted to God, in order to sacrifice them to the Lord your God”

Perhaps we could ask ourselves a similar question, do we sometimes think that because we follow a tidy religious system in going to church, tithing or doing good, we can somehow make up for the fact that we do not really live according to the Word as we should? Religious observance without obedience is empty before God. The best sacrifice we can bring to God is a repentant heart (Psalm 51:16-17) and our bodies surrendered to His service for obedience (Romans 12:1).

Samuel miserably, tries to justify one sin with another, he says, “I sinned…because I feared the people and obeyed their voice”. In that last act of desperation he reached out and tore the corner of Samuel’s robe, and pleaded “honor me now, please, before the elders of my people and before Israel” Saul could never get it right. Had he feared GOD more, he need have feared the PEOPLE less. Had he loved GOD more, he would have pleased the PEOPLE less.

Are we concerned far more of our image in front of people or are we willing to obey God in doings that pleases His heart? Let us serve God as Colossians 3:22 says, “not by way of eye-service, as people-pleasers, but with sincerity of heart, fearing the Lord”

Finally, Saul wondered if he could do something to “regain his position”. Samuel let him know there was nothing he could do. Vs 29 He who is the Glory (STRENGTH) of Israel does not lie or change his mind; for he is not a human being, that he should change his mind. Saul probably thought of himself as the strength of Israel. But the LORD God was The Strength of Israel and Saul needed to hear it, just as much as we need to, today.

Prayer
Dear Heavenly Father, thank you for reminding me today, that you delight in my obedience to your word and will. Help me to be careful to overcome my selfish desires and give you the full control of my life. I acknowledge that you are my STRENGTH and an ever-present unchanging God. Let me see Lord, that you do not change your mind, for you are God! I trust in your plans for me and my family. With you in my life, help me to make a difference to someone today.
I stand in awe and bless Your great name.  Amen! 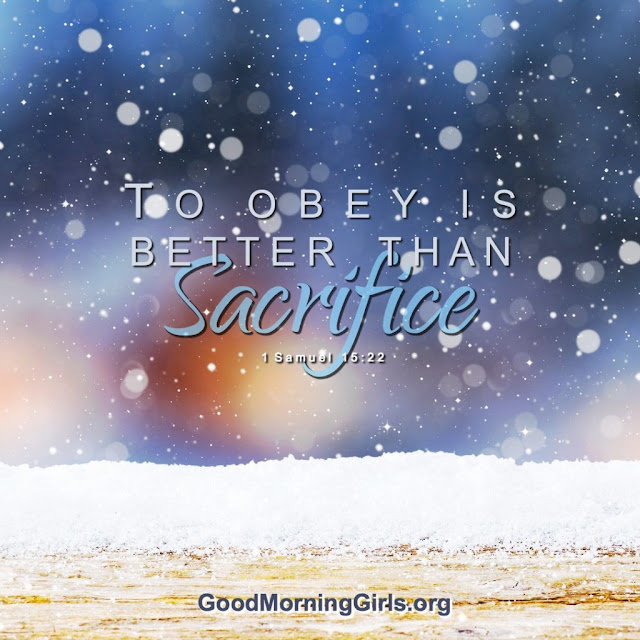