Isaiah 52 and John Chapter 18 to 19,  describe the suffering that jesus experienced up to his crucifixion.. It starts with Judas, his close friend and disciple, betraying Him to the soldiers who arrest Him. Jesus knew this would happen and had already predicted His arrest and crucifixion from  John chapter 12. He then suffers false accusations in a series of show trials in front of the High Priest’s father-in-law Annas, and then the High Priest and finally Pilate.
He is also subjected to harsh interrogation, sleep deprivation, imprisonment, public ridicule. Things go from bad to worse. In John Ch 19 verse 1, Jesus is subjected to an entirely undeserved whipping and then the infamous “crown of thorns” is placed on his head. As Isaiah  had predicted in Isaiah 52:14-15,
“Just as there were many who were appalled at him- his appearance was so disfigured beyond that of any man and his form marred beyond human likeness”.
Isaiah called him “a Man of Sorrows” a few verses later in Isaiah 53:3.

Jesus experienced sadistic torture and racist mocking from the Roman soldiers. They mocked him as the “king of the Jews”. His disciples deserted Him at this point.  There was  Peter’s denial, and Judas’s betrayal. The disciples showed themselves unwilling to share in Jesus’ rejection and suffering at this time.
He was rejected by the world around him. He was crucified and left to die.

If, as followers of Jesus, He leads us through a period of rejection, ridicule,  or other suffering, how do we respond?  Will we go where Jesus  leads us? Do we follow Paul’s example and courageously proclaim in Philippians 3:10, “I want to know Christ and the power of his resurrection and the fellowship of sharing in his sufferings, becoming like him in his death, and so, somehow, to attain to the resurrection from the dead.” Or do we run away from where Jesus calls us. Do we deny Him, do we even betray Him? It is likely that we will respond in good and bad ways, at different times.  If and when we do fail, the good news is that Jesus restored many of those disciples who initially ran away. He forgave them and He restored them.

Suggested Prayer Response:  Lord Jesus, thank you for going through all the suffering you experienced for us. Thank you for setting us free from our sins, by Your sacrifice on the Cross. Help us to be faithful in our walk with you, even when life becomes tough. We pray Your forgiveness for all the ways we have refused to stand up for You and instead gone our own way. May we die to our sinful nature and fellowship with you in Your Resurrection. In Jesus Name. Amen 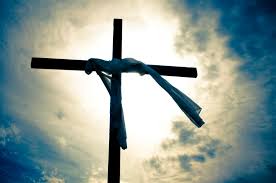